My model consists of a linear regression between the popular vote share and average support for either the Democratic or Republican presidential candidates. I constructed such regression based on popular vote and average support data from 1968 to 2016, or the past 13 presidential election cycles. The model necessarily excludes other variables, like second-quarter GDP, given the incorporation of such variables results in an ambiguous or non-significant improvement in the model’s predictive ability. The formulas and coefficients for both the Democratic and Republican candidate average support models are demonstrated below:

The in-sample and out-of-sample performance of my model are summarized in the table above. Some of the major takeaways include: 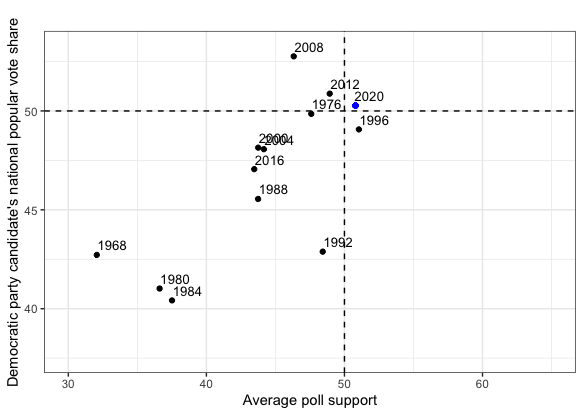 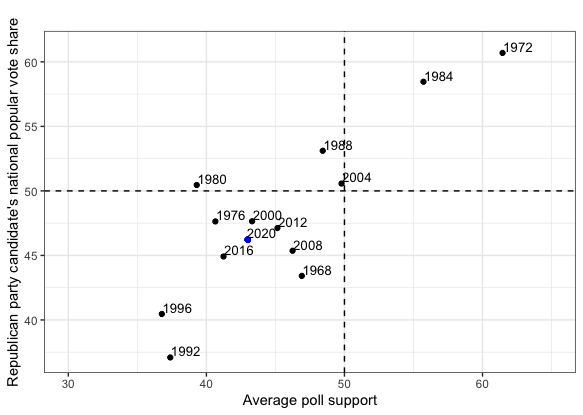 Similar to the national popular vote predictions, there are uncertainties with the state-level predictions. Aside from the aforementioned predictive intervals, one must consider that the average support data for the 2020 candidates in each state is varied; some states have better and more frequent polling, while others do not.

Ultimately, my linear regression model based on average support projects a Biden win, with the Democratic candidate taking 52.1% of the two-party popular vote share and 319 electoral votes. Of course, such prediction is not without its uncertainty, but the model’s strong in-sample and out-of-sample performance for both Democratic and Republican candidates indicate that the model’s afromentioned predictions have some validity. Additional data from future elections, including 2020, will continually improve my model and its predictive ability.