The Economy in Popular Vote Predictions

It’s “the economy, stupid.” Such was the famous words uttered by James Carville, Bill Clinton’s campaign strategist, in 1992 as one of the three messages the campaign workers should focus on. This phrase perhaps best encapsulates the basic understanding most people have of the major role the economy plays in deciding elections. But can the economy help us predict elections? Recent literature has offered some insight into this question, with Healy and Lenz finding that voters primarily respond to the election year economy instead of longer-term economic figures (Healy). In turn, this blog will seek to understand how the economy can predict elections by analyzing the relationship between second quarter election-year economic variables and vote shares, fitting models for these data sets, and ultimately using the model with the greatest predictive power to predict the 2020 election.

The Relationship between Election-Year Economic Variables and Popular Vote Share

To understand how the economy can predict election results, it’s important first to understand the relationship between election-year economic variables and the popular vote share. The graphics above display such, comparing second-quarter economic figures like unemployment and GDP against the incumbent popular vote shares from 1948-2016. Some of the major takeaways include:

Now I will proceed with creating prediction models. I will do these for each of the second quarter election-year economic variables, running univariate linear regressions between such data and the historical incumbent vote share from 1948-2016. To evaluate the predictive power of each model, I will consider the variables listed in the table below.

Model Evaluations. Based on the in-sample values, the majority of the listed models have a poor in-sample fit. With r-squared values ranging from 0.00004 to 0.326 and MSE values ranging from 4.2 to 5.12, the low in-sample fit for most of the economic-based models concords with the tenuous relationship previously established between the second quarter economic variables and incumbent popular vote share. The three models with the highest r-squared and lowest MSE values are model 1, model 2, and model 5. 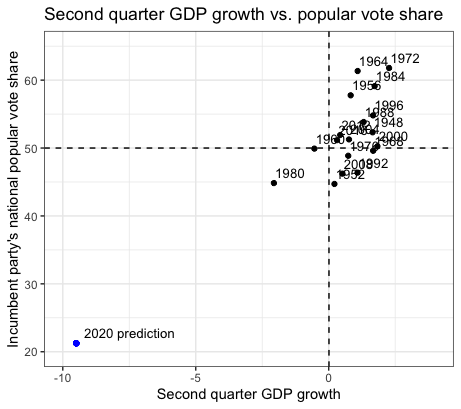 Using the univariate linear regression model based on second-quarter GDP growth, my prediction for the incumbent’s popular vote share in 2020 is 21.26%; the blue point indicates this in the scatterplot above.

The prediction interval associated with my 2020 prediction ranges from a lower bound of -4.1% to an upper bound of 46.6%, which indicates the considerable uncertainty associated with such value. Moreover, the range in popular vote share predictions across all the models spans from 21.26% to 80.33%, suggesting my 2020 prediction is highly sensitive to the economic variable chosen for my prediction model. Overall, my 2020 forecast and its associated uncertainty and sensitivity indicate how the economic model of voting behavior is not as clear cut as I might have initially assumed. In truth, my 2020 prediction is quite far-fetched considering how much of a landslide it would present relative to all previous elections in the dataset.

Overall, our analysis has demonstrated that economic variables have a far more tenuous relationship with the incumbent vote share than one might have initially expected. After fitting models for various second-quarter election-year economic variables, I found that the model using the second-quarter GDP growth had the best in-sample and out-of-sample fit to historical incumbent vote shares; the prediction for the incumbent vote share in 2020 associated with this model is 21.26%. However, the uncertainty and sensitivity associated with such value leave room for incorporating variables not related to the economy in future prediction models.